This fascinating photo has been reblogged left and right on the internet, with virtually zero information attached to it... I have also seen it titled as "Norman's Ghost Hole", it is attributed to 1900, and called a traveling show. Can you imagine taking apart this ornate facade and rebuilding it over and over? Surely it is too intricate to be a traveling show. Is there a space behind it, like a walk-through funhouse? Or is it just a very elaborate stage... where perhaps the lady or gentleman pictured performed psychic readings, fell into trances, and pulled fluffy cotton ectoplasm out of their ears for an astonished Victorian crowd? 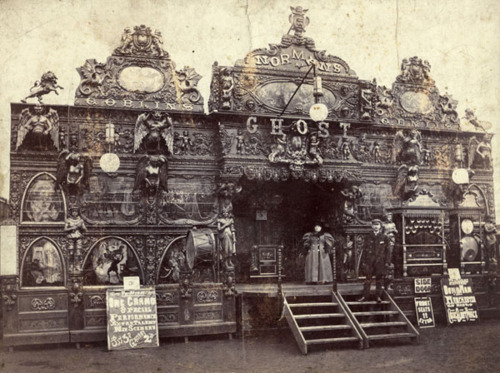 Thankfully a clever girl named Mlle Ghoul did some sleuthing and shared links to the manufacturers in the comment section of a blog that reposted the photo. They were an English company named George Orton Sons & Spooner Ltd-- "Orton and Spooner were major ride-builders and decorators based at Burton-on-Trent, Staffordshire. Their work spanned early carving through to construction of 19th Century Shows, classic Scenic Railways, up to the design and building of 1930s thrill rides such as the Ark and Dodgem." --via the National Fairground Archive on the University of Sheffield's website.

Here is a link with a brief look at their company history, and another photo collection of their beautiful show fronts and facades. Googling "Orton and Spooner" also yields pages of delightful images, and it's nice to see that many of their creations have been preserved and restored. A paperback book called "Men at Work: The fairground artists and artisans of Orton & Spooner" by Alan S. Howell was published in 2003 and is now out of print.

I really wish I could make out what the signs say on Norman's Ghost Show.

Posted by FROZEN CHARLOTTE at 1:42 PM